Maria Fernandez is a long-time friend and collaborator of Pantheatre. She has been, for many years, my esoteric sister, and especially after I graduated and became a positive skeptic – of the “why not?” kind…  She will be guest of honor at two major events in 2018 :

No one that I know has travelled the way Maria Fernandez has, and therefore no one that I know knows more about “teachers, cheaters, gurus, mentors”. To mention the masters and mistresses Maria has befriended would sound like science fiction. To name but three: Baba Ji, the Dalai Lama, the formidable Shakmah Winddrum. Yet, three years ago she undertook possibly her most serious journey when she had a very severe brain stroke and went under for some months. I visited her with trepidation shortly after it happened; sang to her and moved her arms lightly in order to dance with her. I saw the glimmers of a smile on her face. She says that she has recovered 97%, and that she is happy to do without the overactive remaining 3%.

Maria is also a hardy performer, especially in contact dance. A professional masseuse, and a professional hairdresser too! Checking on internet, I found dozens of Maria Fernandez: she has the ultimate flamenco name. One of her alter egos is well worth checking: the original La Caramba! – but in fact Maria is not Spanish at all but of Italian-Afro-Portuguese origins. English in fact. Her father was born in Trinidad, her mother in Naples. She now lives in Amsterdam. Such geography points to a uniquely ‘placed’ voice.

With both the Paris Symposium and the Myth and Theatre Festival in mind, I choose to present Maria Fernandez by narrating two ‘parallel’ stories, in the manner of Plutarch. Greek thinker of ancient Rome, philosopher, biographer, moralist, Plutarch died in 120 AD at Delphi, the omphalos, the navel of the world, as the Oracle of Delphi was called, and where Plutarch officiated for more than twenty years as high priest. He was also one of Shakespeare’s main sources of inspiration. What better credentials can a performing artist ask for: oracular thinking, mythological knowledge and philosophical appreciation of ‘moral’ fiction.

Of special importance are Plutarch’s reflections on the links between humanity, divinity and divination.  I would say his insights were the most apposite and open-minded on this topic in all of our ‘Mediterranean’ cultural history. Timing helped, undoubtedly: he lived at a time of highest culture in a Roman Empire that was not yet under Judeo-Christian duress. His insights were the most apposite especially concerning the border and mediation between the human and the extra- or non-human, and therefore the most germane towards creative and insightful procedures, which I would put in terms of the imagination of divination. His are possibly the deepest insights, psychologically, and the richest too, for a theater that claims or at least aims to be oracular, especially in its relation to the interpretation of texts, and to the ‘speaking’ of and in voices. Plutarch wrote The Parallel Lives (of Illustrious Men): two-by-two juxtapositions – (which one could link to our “leader / follower” exercises…) I have a great liking for the art of juxtaposition, especially when linked to the notion of counterpoint in a choreographic theater.

So, here are two parallel stories in the spirit of Plutarch, offered as a presentation of Maria Fernandez, two forms of Nekyia as well, and two oracular consultations.

Very early on, over twenty years ago, Maria discovered Ayahuasca in Amsterdam where she lives. She flew to Brasil and came upon the Santo Daime cult. To those who still question her ‘choice’ of this particular approach to Ayahuasca, she answers she encountered proper ritual control of the experience. She flew over with only the vaguest of notions of the location. So, she is sitting alone on a wall in a semi-cultivated jungle area when two men approach, with machetes and a gun. They request her company to perform a ritual. She consults instantly her spiritual guardians: Shakmah Winddrum at her sanctuary in Philadelphia, USA, and her Egyptian cosmic master. Both approve. Maria follows the two men to a tomb in the cemetery just behind the wall. The men light and pass a large Santa Maria joint. The tomb opens and the recently deceased padrino of Santo Daime greets her: she is expected at the village nearby where Maria will spend over a month with his family.

Apollonius of Tyana (Turkey, 1st c. AC) was, with Iamblichus (Syria, 3rd c. AC), the greatest magician figure of Late Antiquity. At one point, he visited the Oracle of Trophonios, in Lebadea, Boeotia, where he entered a dark, snake-filled tunnel and descended underground to consult the Oracle. He announced he would ask Trophonios which was the best philosophy. The attending priests were reluctant to let him consult the hero-god, “suspecting him to be a magician” (!). This was An Age of Anxiety, as E.R. Dodds put it, so, questions to the oracle had become mostly of a metaphysical nature, no longer personal or personally mytho-poetical. Apollonios braved the priests’ resistance and descended anyway. He emerged from his oracular encounter seven days later in a different location with a book of Pythagorean wisdom. Trophonios had apparently declared that Pythagorean philosophy was the wisest.

Plutarch is termed a “moralist”. Moralists traditionally proceed through ethical and political meditation modes, often through stories and fables, rather than through constructed, prescriptive, right or wrong, good or bad discourses, or scenarios. Or think of them as mytho-poets. A moralist is not a moralizer and his or her performance is akin to mythological perambulations, or Deleuze rhizome-like connections. Juxtapositions too. These are rhetorics that advocate tolerance, risk and diversity in human behaviors, and allow, even ask for venturing beyond the porous borders of what we consider human. Moralists are “Why not?” skeptics who experiment with and open the theatres and voices of reality, in complex and even equivocal performances (certainly not uni-vocal). 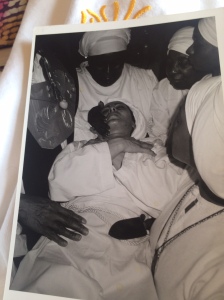 Maria undergoing initiation rites at the SEED Sanctuary, in Philadephia USA, conducted by Shakmah Winddrum (1931-2010). Both Maria and Shakmah, with her closest assistants, were invited to the Myth and Theatre Festival, dedicated to Aphrodite, at the Chartreuse of Villeneuve lez Avignon, in August 1993.

Maria, with her daughter peering behind her, and her son, performing: he has become – guess what? – a famous pop star singer and musical arranger. And the name of his group? Of course: Arcana.