Lacura, by Bibiana Monje
Democracy in America, by Romeo Castellucci 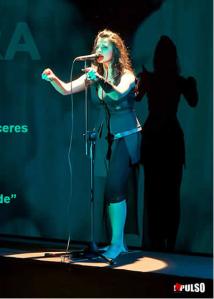 This article follows-up on a first post on LACURA, the performance of and by Bibiana Monje presented in Madrid in November 2016 as an avant-première I described as a Miraculous Catastrophe  [1]. It was then premièred in Bibiana’s native Canaries Islands on March 17, 2017, this time ‘after the catastrophe’: the computers and multi-media effects behaved impeccably, plus, Linda Wise and I did some fine-tuning with Bibiana on some of the lessons learnt in Madrid on miracles and catastrophes. LACURA is turning into a big success, expanding beyond The Islands, as the locals call the Canaries, into La Peninsula – the Spanish mainland – and beyond. In this article I wish to focus on something that was picked up and commented by the critics, and which I consider essential to my sense and ambition of performance, something that one of the articles went as far as to put in terms of “emotional pornography”.

Here is the quote:

“Lacura by Bibiana Monje, (does she enjoy word puns!) is a theatrical solo, an autobiographical comedy, intimate to the point of emotional pornography ; she questions and makes confessions, saturates us with possibilities and pleads for a solution in order to collect herself in silence (?) Lacura considers the impossibility of being totally sane in our unhealthy way of living and of a possible redemption in acknowledging this fact. It also offers a place of resistance, made of memory, which requires remembering and therefore performance. » [2] (My underlining and translation.)

I wish to address the question of “emotional pornography” – which, to some persons may sound crude, coarse and politically incorrect. The matter is too important, artistically and politically, to be sidestepped with euphemisms and not to be addressed clearly, in an adult in-depth mode. So, I return to some more gossip – nothing scabrous – on Bibiana Monje, before addressing the ideas and values involved. These are the sort of stories with which Bibiana could easily write several follow-ups to Lacura. 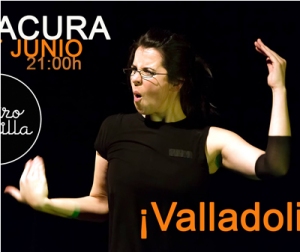 When her father offered her to take over the prestigious family wine-business (number one in the Canaries – and she is an only-child), Bibiana had already decided to apply for Madrid’s prestigious Royal Academy of Dramatic Arts. Her father bowed with gracious fair-play. A few years later he was to take up a suggestion of “Wine and Sex” promotional tasting events that Bibiana staged at the (magnificent) Monje winery[3]. Bibiana was probably late with her application to the Drama Academy and missed one of the main auditions. By some kind of fluke-mistake, to do with her non-Peninsular status, she was offered a place. Of course she accepted, knowing well there might be a legal flaw, and took the flight to Madrid to start her drama studies. She walked into the grand building with trepidation, putting on her most cunning innocent smile, ready to start crying if stopped at any check-point and to break any teacher’s heart with emotional blackmail. In fact, she did very well and graduated with honors even though she was far too eccentric to play ladies in a Lope de Vega classic… Though, who knows? In parallel, she started a rock band. One of her teachers at the Academy happened to be our friend and ex-Roy Hart colleague, Vicente Fuentes – become top professor of classical Golden-Age Spanish verse. Vicente is also from the Canaries, and has a keen, masterful eye for seeing-through students’ merits and ambitions. I do not think he helped Bibiana usher her way into the Academy, but he did advice her to come work with Pantheatre. She participated in the 2008 (?) Myth and Theatre Festival in which we all attended a famous breakfast, a real one, set-up early-morning with the sun rising in the bucolic garden behind Pantheatre’s chapel-library: a tête à tête breakfast between Lola Flores[4] (Bibiana) and Greta Garbo (Elisa Matula[5]) – where Lola-Bibiana gave Greta some cunning and sexy career hints. Unforgettable.

Why all this? Why return to memories, to gossip? It is my cautious and circumspect way to approach the question of “intimacy to the point emotional pornography”. My comments start with the last phrase of the quote on the importance of memory and memories: 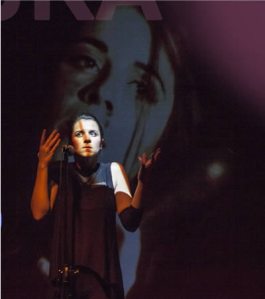 A few lines on pornography. It is important to underline that porneia is one of the major attributes of a goddesses: Aphrodite. Major and divine – and I feel like adding, just to stress the point: “transcendental” – in any case beyond us humans. It is divine: neither good nor bad. What can be dangerous is excessive and exclusive identification: humans cannot be gods. But then again such dangerousness, especially in Aphrodite’s case, can denote and ‘bless’ some of the best, most radical, most creative iconoclastic artistic moves (think of Manet, Picasso, Koons – or closer to home: Chignaud/Bengolea/Monteiro-Freitas…) Pornography’s bad press and the moral contempt it gets comes mostly from the Mosaic moral heritage, where it is blamed entirely on women, who then, naturally, blame it back onto patriarchy. Post-porn, transsexual and even post-colonial feminism is now thoroughly reviewing the matter. In his lecture at the 1995 Myth and Theatre Festival dedicated to Aphrodite, James Hillman stressed the fact that obscenity has been conveniently dumped onto sex and pornography allowing for obscene behavior in areas such as finance, or even politics[11]. What then would “emotional pornography” be? Deeply human, performed expressions of emotion. 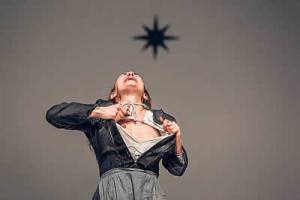 I wrote these lines in Bilbao, where Linda Wise and I were directing a project on Voice, Theatre and Mantics. Coincidence: Romeo Castellucci was presenting his latest piece titled Democracy in America and we all went to see it [12]. Another masterpiece, and especially its main scene: a long, drawn-out dialogue between a peasant puritan young couple, husband and wife (both played by women, like all the cast.) Possibly the most classical scene I have seen Castellucci direct, and quite possibly his best ever. A dialogue based on Tocqueville’s book Democracy in America, 1835. This scene was so emotionally poignant and wrenching that I feel like bringing in the word “pornography”, and to bring it in because what made the scene so impossibly, crushingly emotional was God, the God of the Bible. How is it possible that we have invented a God that is so impossibly cruel with these two poor puritan peasants! The scene outdoes the Bible’s Job – and possibly because women are involved. The husband applies all his saintly and patient good will to assuage his wife and to remind her that “if you ask, God will provide”. The wife rebels, explodes in blasphemy. She sells her sick daughter to an Indian witch, and performs a diabolical (Indian witch) possession, tearing her clothes full front center stage: amazing acting, amazingly directed. This for me was “pornography” of the highest order and at the complete opposite end of the sexual spectrum. No wonder Aphrodite was born of the bloody castration of Uranus…

To finish, some words on a long tradition called “Hatred of Theatre” – which also has some of its roots in the Bible (and in Plato, of course). Castellucci presents the foundations of American democracy in four or five scenes with great artistically biased choices. He underlines (after Tocqueville) the importance of the puritan Bible (words used as weapons) and of skin, especially the red-skins – and  includes a very long and laborious list of wars, battles and constitutional amendments in the buildup to democracy[13]. His work is sometimes described as non-narrative theatre, and has been claimed by contemporary alter-theatre movements, some of which can be clearly theatre-hating. I am thinking of the contemporary schism between performance art and theatre. One of the things theatre-hating movements hate the most is in my view “performed emotion”. Theirs would be a negative take on “emotional pornography”. Mine is a positive one. Castellucci has his own take, which would require a very demanding analysis to unravel, especially in this piece, and especially in the puritan couple scene. In any case: brava Bibiana, bravo Romeo!

[3] These tourist events are still on, in case you pass by Tenerife. And the wines are good. http://www.bodegasmonje.com/  or check Facebook.

[5] Elisa Matula is also a top actress, now in New York. She was the most amazing Ophelia I’ve seen, in Sean Lewis’ Brooklyn Shakespeare underworld version in which she lets Hamlet really ‘have it’. She went on to be Lewis’ Anna Karina in his Jean-Luc Godard homage film.

[6] The great classic compendium is Frances Yate’s The Art of Memory, and the Method of Loci (memory linked to image, linked to place). It is again, in my view, James Hillman, who draws the most complex cultural conclusions about the imagination in relation to image, place and memory.

[7] See especially The Dream and the Underworld, or the succinct definitions Hillman gives in his Archetypal psychology a brief account.

[8] I place the word « attack » in quotes because nowadays it is considered politically incorrect. Roy Hart could be quite martial in his militancy and agency. It shows the thoroughness of his idealism.

[9] See the poem called BIODRAME written for Roy Hart by Serge Béhar which I consider to be Roy Hart’s manifesto – and his own gloss on it.

[10] The implications of “redemption” call up the borderlines between,theatre and therapy – or catharsis for that matter. These are crucial, and ancient, topics, implicit in this article, but which need developments beyond the scope of this article.

[12] I ran into Romeo Castellucci before the performance. We spoke mainly politics: the French elections were the next day and I told him I hoped his piece would help me decide (in an oracular mode) on who to vote for, given the complexity of current ‘Democracy in France’. I did actually help.

[13] There is also a very welcome (delicious?) ‘political science’ aspect to Castellucci’s performance (majorettes and all…) One note here: Castellucci underlines the fact that American democracy was a new and different model from the Athenian one. There is one huge and dark similarity – and I think Castellucci refer to it in the list of anagrams (especially of Middle East countries) he extracts from “d e m o c r a c y i n a m e r i c a”. Athens was practically genocidal in imposing its model of democracy on the Aegean states. The USA liberation of Kuwait and its later invasion of Iraq was not far off; both were done in the name of democracy. It was more like massive protection racket: protecting Athens’ commercial maritime empire, America’s Gulf oil.